Book Review: Can we do good without it really costing anything?

To be seduced by “MarketWorld” thinking is one thing – to grapple with how to break the cycle is quite another. 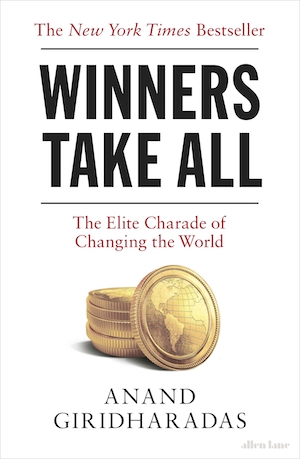 It’s a seductive idea – the notion that we can “do good” for people and the planet while also profiting from the status quo, that we can make a difference without it really costing us anything.

This idea is at the heart of what Anand Giridharadas, TIME Editor-at-Large and former New York Times journalist, calls “MarketWorld”: enlightened businesspeople and their supporters in the worlds of charity, academia, media, government, and think tanks who believe that the best way to solve our most serious social and environmental challenges is through the free market and voluntary action.

Giridharadas argues that this group of elites seeks to design fixes to complex social problems without asking fundamental questions about power in a society. They spin “an intellectual cocoon for themselves” that allows them to avoid confronting the deeper change required to achieve systemic change to social problems.

This philosophy is particularly prevalent in the finance industry where, according to the Global Impact Investing Network, there is now more than US$500 billion in impact investments. Impact investment fund managers often argue that investors shouldn’t have to sacrifice financial returns to make their social or environmental impact, that impact investing is a win-win.

It’s hard to get the balance right between speaking truth to power and pulling your punches to avoid alienating the very people you are seeking to influence.

Larry Fink is a good example. Black Rock, the world’s largest fund manager led by Fink, recently announced that its actively managed funds would cease to invest in companies that generate more than 25% of their revenue from thermal coal production. His stated motivation was not concern for the planet, but the investment risks associated with climate change. While this announcement has been hailed as a major breakthrough in the fight against climate change, the majority of Black Rock’s investments are in passively managed funds and they will continue to be major shareholders in firms such as Exxon Mobil, Chevron, and Glencore.

Giridharadas responded via Twitter to the announcement by arguing “you cannot appoint yourself a leader in solving a problem you are still working very hard to cause”.

In Winners Take All, he is also sceptical, even critical, of talented people from across the legal, finance and consulting industries who volunteer or undertake pro-bono work on critical social issues. He argues they are at risk of being “co-opted”, offering a “watered-down” theory of change that is “personal, depoliticised, respectful of the status quo and the system, and not the least bit disruptive”.

MarketWorlders, he argues, don’t want to hear that the source of their own wealth may be reinforcing the harm that their philanthropy then seeks to address.

Play by the rules and you become a global “thought leader”. Break MarketWorld’s implicit rules to suggest deeper, systemic change, and you quickly find yourself un-invited to MarketWorld conferences and other events, as academic Rutger Bregman recently discovered. At the 2019 World Economic Forum meeting in Davos, Bregman called out billionaires for tax avoidance and climate change hypocrisy. He didn’t get invited back this year. He had breached what Giridharadas calls “the Aspen Consensus”: the winners of our age must be challenged to do more good. But never, ever tell them to do less harm.

But is Giridharadas setting up a false dichotomy?

Certainly, Save the Children, where I am the Chief Executive Officer in Australia, believes that we won’t solve many of the planet’s most pressing problems without deep, systemic change. Our founder drafted the Declaration of Geneva, the world’s first human rights document approved by an inter-governmental institution, and the forerunner to the Convention on the Rights of the Child, to radically change the way the world treated children.

More recently, we were intimately involved in introducing aspects of the Modern Slavery Law, and we have been campaigning for improved protections of children impacted by war, such as calling for countries, including Australia, to sign up to the Safe Schools Declaration.

Our on-the-ground program work is usually what attracts philanthropy, but it is our policy and advocacy work that undoubtedly has the greatest impact for children and their families.

However, we are also supporters of using the “system” when that makes sense.

We regularly seek the advice of leaders in the legal, finance and consulting sectors to supplement our own capabilities. The pro-bono support provided to us by firms such as Herbert Smith Freehills and Boston Consulting Group is crucial to many of our most significant innovations. A number of Save the Children’s board members are current or former employees of such firms.

We accept funding from many leading Australian corporates. Most recently, we accepted a $6 million donation from Westpac to increase our child protection work in the Philippines following revelations that the company’s system had failed to detect Australians using their payment system for child pornography.

And this year Save the Children has launched its own impact investment fund.

Giridharadas might argue we are another example of a charity seduced by MarketWorld thinking. But in an environment of unprecedented demand for our services and an aid budget at a record low, we must find new sources of funding for social innovation. This includes finding ways to leverage private sector investment.

Nonetheless, Giridharadas’ book should prompt deep self-reflection for all of us that seek to advance social and environmental causes.

He is right when he decries the failure of most philanthropists to fund advocacy.

More personally, it’s easy to be seduced by the offer of significant philanthropic funding, invitations to leading conferences and events or coveted fellowships. And it’s hard to get the balance right between speaking truth to power and pulling your punches to avoid alienating the very people you are seeking to influence.

All of this Giridharadas recognises, resulting in what is perhaps the most powerful part of the book: the Acknowledgements. Here he provides the back story to how the idea for the book emerged and his own struggle with being part of “MarketWorld”. He worked for McKinsey, gave TED talks, and received a fellowship from the Aspen Institute.