The chemical attack in Syria: Sorting truth from propaganda

Sorting truth from propaganda in a war as complex as the Syrian conflict sometimes seems like an impossible task.

International media have widely reported on a sarin nerve gas attack that was said to have occurred at the town of Khan Sheikhoun in Idlib province, Syria on 4 April 2017, killing dozens of people and injuring many more. Syria and its allies have denied responsibility, claiming that rebels had stored chemical weapons in a warehouse that was bombed by the Syrian air force, and that leaking gas from this event caused the casualties.

Since the attack, various individuals have argued that rebels staged it as a 'false flag' operation to discredit the Assad regime and draw the US further into the Syrian conflict. Principal among the false flag theorists is Theodore Postol, a former Professor of Science at the Massachusetts Institute of Technology (but also Tim Anderson, a Sydney University academic).

Sorting truth from propaganda in a war as complex as the Syrian conflict sometimes seems like an impossible task. The US has attempted to refute 'false narratives' by issuing a declassified intelligence report, but this in turn has been attacked by Postol and others as a fabrication. Undoubtedly memories of the faulty US intelligence report on weapons of mass destruction in Iraq in 2002 and distrust of the motives of the present Trump Administration add to suspicions over the veracity of US intelligence assessments.

Although there is misinformation and some genuine confusion over the events of 4 April, there is nevertheless some hard evidence and scientific findings that cut through the miasma.

What does not seem to be in dispute is that victims of chemical poisoning presented themselves at hospitals in Khan Sheikhoun in the early hours of 4 April shortly after a Syrian air force strike on the town. These individuals showed the classic symptoms of nerve agent poisoning and subsequent analysis of samples by the French government and others have confirmed that the agent was sarin.

Also not in dispute is that after the air raid a small crater was found in a road in the north part of town. The size of the crater is consistent with that caused by a chemical round, which has a smaller explosive charge relative to a conventional bomb. Protruding from the crater was a short length of twisted metal and a metal plug that could possibly be the remains of a chemical munition. 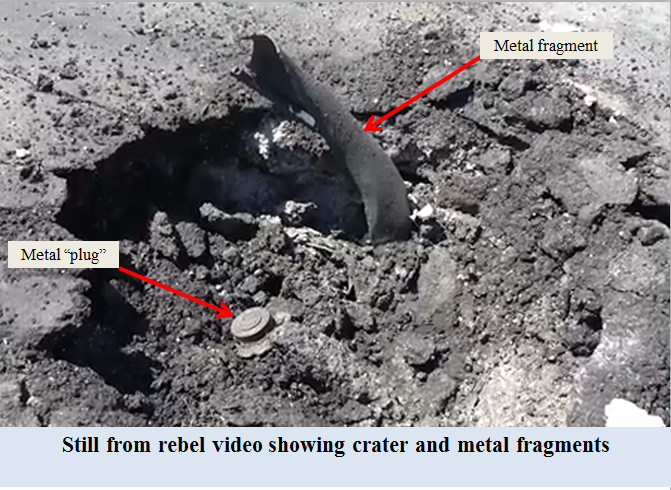 A French National Evaluation analysis of samples from the crater reveals that in addition to sarin, the chemical hexamine was present. Hexamine has been declared by Syria as part of its stockpile of chemical agents, and the French have confirmed that Syria used it in the production of sarin as a stabiliser. In this regard, hexamine is a unique signature for Syrian manufactured sarin – no other country is known to have used it for this purpose. This is damning evidence of Syrian military responsibility for the chemical attack.

…can be shown, without doubt, that the [US intelligence report] does not provide any evidence whatsoever that the US government has concrete knowledge that the government of Syria was the source of the chemical attack in Khan Shaykhun…

His counterarguments have been embraced by a number of followers worldwide (including in Australia) and require close examination.

Postol does not dispute that sarin killed people in Khan Sheikhoun on 4 April. His case is largely based on the nature of distortion of the metal fragment in the crater – he claims this proves that it was not dropped from an aircraft, as stated by US intelligence. His theory is that a sarin-filled tube, possibly a 122mm artillery rocket body, was placed on the road by individuals on the ground and overlaid with a small explosive charge to disperse the agent. These individuals, presumably rebels, did this as a false flag operation to place blame on the Syrian government.

As further proof of faulty US intelligence, he claims that a dead goat found about 40 metres from the crater was upwind and therefore could not have been killed by sarin from the crater. He argues that it must have been placed there by persons on the ground as part of a staged event. He also states that there was other tampering of evidence at the site.

There are a number of major problems with Postol's hypothesis.

It is not realistically possible to determine from the rebel videos how the chunk of metal in the crater became distorted in the manner shown. Postol's views may be correct, but equally the metal could be a fragment resulting from a chemical rocket impacting the ground and detonating. On the thin evidence available, it is difficult to be certain exactly what the metal fragment is. Human Rights Watch (HRW) speculates that it may be the remains of a Russian chemical bomb. The HRW view possibly could be correct, but the absence of any other fragments (including the tail section, which would normally survive detonation) makes this seem unlikely.

More importantly, Postol does not explain how any rebel group managed to coordinate the detonation of their supposed device with an air raid by the Syrian government. Nor does he explain why they would place their device in the middle of the road in a sparsely populated part of the town where it would potentially cause few casualties.

His theory also fails to explain the origins of the sarin in the postulated tube. It is highly unlikely that any rebel group in Syria could make sarin in the quantity used. While Islamic State (IS) has been able to make a crude form of mustard, there has been no indication that it has been able to make sarin, which is considerably more complex to manufacture. In any case, IS does not control this area. Furthermore, the French analysis shows that the Khan Sheikhoun sarin contains hexamine, which indicates Syrian government manufacture – any suggestion that some rebel group identically copied this formulation stretches credibility.

With regard to the dead goat, Postol has simply got the wind direction wrong. It is clear from smoke drift shown in a rebel video that the air was almost still in the early morning of 4 April, with just a slight easterly movement above roof top level in the direction of the goat. Thus the animal could have easily been killed by the sarin from the crater.

Postol also seems to be unaware that there is evidence of a second chemical round that probably detonated about 300 metres southwest of the road crater. Sarin from this round could also have killed the goat – given that this second munition appears to have landed among houses, it was likely the cause of many of the human deaths. 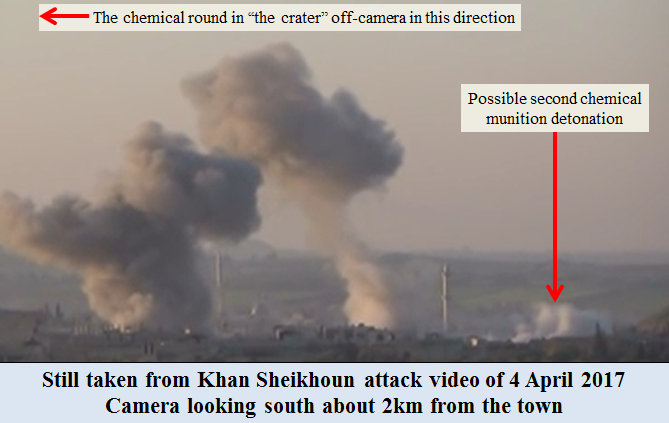 Postol was an eminent scientist and his views cannot simply be ignored. However, on this occasion the evidence to support his argument is not there – he has got it wrong. His writings on this subject have nevertheless been useful in that they have forced analysts to question the evidence closely to determine their degree of certainty in their assessments.

Clearly more evidence needs to be collected before the full circumstances of the Khan Sheikhoun atrocity can be established. The Organization for the Prohibition of Chemical Weapons (OPCW) in conjunction with the United Nations has established a Joint Investigative Mechanism (JIM), to conduct such an investigation, but Russia blocked a Security Council resolution to allow this. Without the JIM or some other independent body to collect evidence from Khan Sheikhoun, the details of the attack may never be known.

But while the particulars are difficult to ascertain, there is still sufficient evidence to state beyond reasonable doubt that the Syrian military is responsible for the attack. In other words, the jury should convict – sadly, in today's world, the reality may be different.