A global Australia needs to be a confident Australia

As a nation, we need to probe the boundaries and content of what passes for “received wisdom”.

Australia’s foreign and security policy successes, stretching back to its first days as a Commonweath, are few and far between. More often, it has been a bit player, bumptious and condescending to its neighbours while remaining deeply deferential towards its principal protectors. Given the many attributes of national power that Australia enjoys, its economic strength and the endowments of its citizens, we must ask ourselves why Australia is so adept at creating an international image that is so inept.

“The fault, dear Brutus, is not in our stars, but in ourselves, that we are underlings”. It is easy, and lazy, to blame “forces beyond our  control” for our problems.

So my forthcoming book No Enemies No Friends attempts an explanation of why we are inclined to fumble and undersell ourselves, and suggests a few steps Australia might take to improve its performance significantly.

Too often Australians evince an over-confidence that accords monumental success in international or security affairs to relatively slender ability.

Instead of examining the dynamics of the world in which Australia operates and the actions and interests of the various players whose interests might impinge on ours – the approach taken by most of Australia’s international relations writers – this book focuses on the deep-seated behaviours and habits of mind that tend to shape and limit Australia’s agency as an influential player on the global stage.

To hold a mirror up to ourselves requires us both to challenge and to respect conventional thought. We can be conventional while questioning convention, just as we can probe both the boundaries and content of what passes for “received wisdom”. We can re-imagine problems, re-evaluate the evidence, re-interpret motive and objectives and re-cast explanations and narratives without condemning “received wisdom” as either fraudulent or mischievous. But “received wisdom” can certainly be found wanting, either incomplete or self-indulgent. 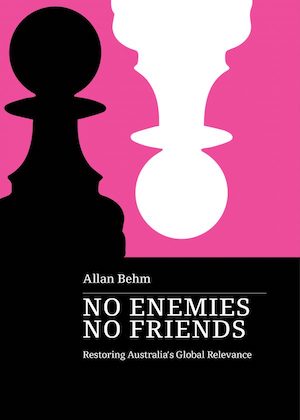 Too often Australians evince an over-confidence that accords monumental success in international or security affairs to relatively slender ability. It is often the fact that we lack the drive to sustain early enthusiasms, finding it difficult to follow through in the face of real or imagined set-backs. The long-term record of our relationships in the Pacific, our dismal history with Papua New Guinea, the on-again-off-again relationship with Indonesia, the current contretemps with China from which we appear unable to escape – these are hardly consistent with a diplomacy or a security posture that carries all before it. Australians imagine that we pursue transformative policies that “shape” the region and exercise a rightful “leadership” when in fact we pursue apologetic policies that satisfy the self-imposed pre-conditions of our dependency on great and powerful friends.

Racism and a profound misogyny lurk in the shadows of our national policy making. These are amplified by gnawing insecurity, a deep-seated sense of remoteness, isolation and irrelevance and, of course, a debilitating incapacity for self-affirmation – the “cultural cringe”. What aspects of the Australian policy mindset condition our apologetic and bumbling image on the international stage when we are so endowed and so secure, far from the major centres of global tension?

Blame is easy to apportion, but a touch of optimism is better to counter the gloomy recital of endemic ineptitude. At its core, the limitation that most holds us back from success is a function of a deep-seated racism – reflected throughout the century of the “White Australia” policy that ended only in the 1960s. Our lack of self-confidence is exacerbated by a reluctance to accept the complexity of our national history and the dissonance between the rhythms of a “culture of belonging” that has lasted over 60,000 years and a “culture of ownership and exploitation” that established itself after the arrival of the First Fleet.

Australians imagine that we pursue transformative policies that “shape” the region and exercise a rightful “leadership” when in fact we pursue apologetic policies that satisfy the self-imposed pre-conditions of our dependency on great and powerful friends.

This assessment might be dismissed as romantic and sentimental, lacking in realism and hard-headedness. But that would be wrong.

Romance and sentiment have a role in any balanced conversation, as they do in any balanced life. Together, they humanise our national agency and provide emotional ballast in the creation of an inclusive, accepting and respectful community that honours and incorporates the cultural, environmental and social wisdom of Australia’s First Peoples. But they do need to be supported by realism and uncompromising reason.

The extent to which we all belong to this fabulous continent and care for it will set us apart from those who favour the zero-sum game that prefers the status quo to the realisation of opportunity.

Australia can be both an exemplar and proponent of global peace and prosperity, purposive and engaged diplomacy, and constructive regional harmony. By modelling the values of equality, inclusion, respect and tolerance and the behaviours of acceptance, humility and modesty, Australia can and should exercise an agency that is uniquely its own. And what are the talismans of a confident national agency? Acceptance of the rightful place and sovereignty of Australia’s First Peoples, together with complete gender equality in the formulation and execution of all aspects of national public policy.

Economic diplomacy: Deploying soft power and the future of trade