Health spending and foreign aid in the Pacific

The newest Pacific Aid Map, with nearly a decade of project-level data for the region, helps shine a light on health.

In 1918 and 1919, the influenza pandemic swept across the world and killed millions. The Pacific suffered disproportionately high mortality. While around 3% of the world’s population died of influenza, mortality reached 22% in some Pacific nations, such as Samoa.

Pacific islanders are generally overrepresented globally for the burden of infectious and non-communicable diseases. Poverty, lack of education and limited access to healthcare are major drivers of this disease burden, despite the efforts of local governments and donors to improve the situation.

Covid-19 has snapped health systems back into focus. It has also revealed the glaring gaps in domestic health coverage in the Pacific.

Health expenditure in the Pacific varies greatly from country to country. According to the World Bank, microstates (Marshall Islands, Micronesia, Palau and Tuvalu) spend on average 14.5% of GDP on health, while bigger economies, such as PNG and Fiji, hover at around 3%. By comparison, Australia – through both private and public funds according to the OECD – spends 9% of its GDP on health, while neighboring low-income countries of Southeast Asia invest around 6%.

According to the World Health Organization, 10 out of the 14 Pacific Island countries spend US$500 or less per capita per year in terms of health expenditure, while the global average is around $1000 per year. Similarly, 12 out of 21 Pacific Island countries and territories – mostly those with close connections to developed countries (for example, Guam or New Caledonia) – have met the goal set by WHO of 4.5 health workers per 1000 islanders.

Of the expenditure in the Pacific, 82% is paid for by domestic governments. A further 8% comes from private contributions, or out-of-pocket payments. The rest derives from foreign aid. 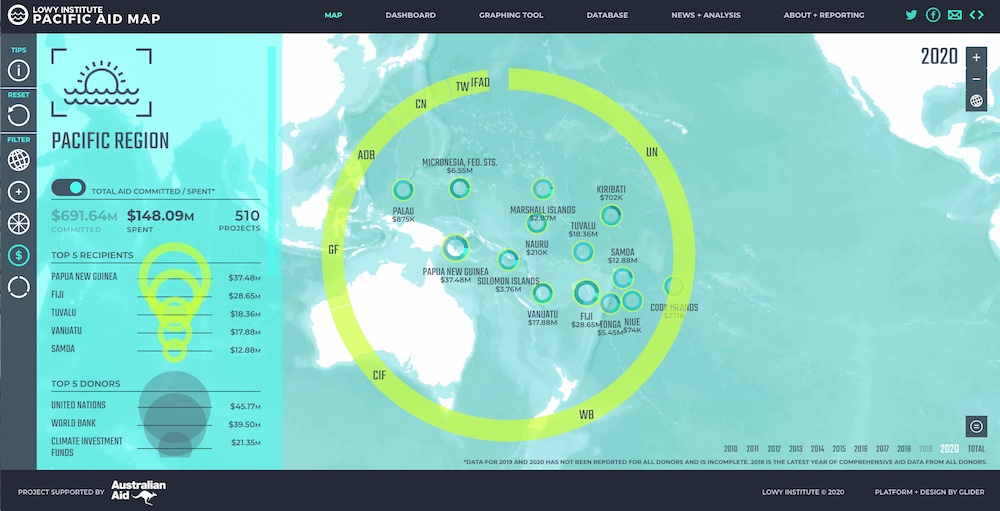 By the numbers, health systems across the Pacific were already stretched and underfinanced – and in some cases, such as Papua New Guinea, on the verge of breaking down completely – heading into the largest pandemic of our lifetime. Pacific leaders were largely prescient and responsible in locking down their borders early to protect their vulnerable health systems from the further strain presented by Covid-19.

But the virus does shine a light on these vulnerable health systems and provides donors an opportunity to reflect on their priorities in the region, especially in the health sector.

The third iteration of the Lowy Institute Pacific Aid Map, released today, adds new functionalities, including a commentary page and the ability to compare aid to local government spending in certain sectors, and two new years of comprehensive data for all Pacific donors – 2010 and 2018 – providing nearly a decade of project-level aid data for the Pacific. The headline result is a 25% surge in foreign aid in 2018 as geopolitical competition in the region began ramping up.

On closer inspection, the data shows aid health expenditure fluctuating between 10 and 15% of total aid expenditure in the region over this period. There was a growing trend of health funding from 2010 to 2013, followed by a steady decrease, to reach a period low in 2016 and 2017. In 2018, the Asian Development Bank invested in a US $100 million Health Services Sector Development Program (HSSDP) – a budget support program in Papua New Guinea – which led to a 50% increase overall in health spending in 2018. Excluding this one-off project, health aid has been in slow but steady decline since 2012 and accounted for 11% of all aid spent in the region over the better part of the last decade. Considering the significant health challenges that the Pacific routinely faces, ranging from malaria and dengue fever to non-communicable diseases, this may come as a surprise. It is, however, in line with the global average – in 2018 13% of total aid was spent in the health sector.

All told, this health support was equivalent to roughly 10% of domestic expenditure in the health sector in Pacific nations. Aid in health service delivery is certainly not a game changer, but it is essential, especially in some areas such as tuberculosis and HIV treatment in Papua New Guinea, where aid has been the decider in stemming the tide of these terrible diseases.

So why has aid health expenditure been subdued in the Pacific?

For some of the big operators in this space, such as the Global Fund and Gavi, the Vaccine Alliance, arbitrary income thresholds and small populations make many Pacific countries not worth their while. For example, due to increasing income levels, Kiribati stopped receiving Gavi support for immunisations in 2017, whereas a recent decision agreed that PNG and Solomon Islands will receive Gavi support until the end of 2021 and 2022, respectively. Vanuatu is no longer eligible for Gavi support. Equally, support from the Global Fund to fight AIDS, tuberculosis and malaria has been decreasing since 2015.

For bilateral donors, the health sector must compete with the flashier or more “strategically significant” sectors of governance and transport. In 2018, a blockbuster year for aid in the Pacific, total aid surged 26% to a record $2.8 billion, roughly 8.5% of regional GDP. Of this increase, the majority went to governance and infrastructure, with health benefiting from the one-off program of support from the ADB, as mentioned.

Covid-19 has snapped health systems back into focus. It has also revealed the glaring gaps in domestic health coverage in the Pacific. Domestic and international demand for greater health support will grow in the decade to come, so expect to see health initiatives become a greater share of the mix of aid that donors will be providing in the years ahead.

The economic crisis simultaneously plaguing the Pacific will further reduce the ability of Pacific governments to finance health, putting even more pressure on development partners to help fill the gap. With donor budgets strapped as they fight their own recessions, we are all going to have to learn to try and do more with less.