A new “hyperleader” has capitalised on the mood of a younger generation fed up with being patronised.

Youth-led protests in Thailand in recent months have rocked the army-backed ruling elite which has been politically ascendant since a military coup in 2014 – with a state of emergency declared in Bangkok on Thursday. One of the harbingers of this rising discontent, which has included calls for the government to step down, a new constitution and, more boldly, a curbing of the powers of the monarchy, was the rise of the progressive Future Forward Party, a new force in a polarised political landscape.

Led by a wealthy young businessman, Thanathorn Juangroongruangkit, Future Forward surprised many with a strong showing in Thailand’s 2019 general election, winning the third-largest share of seats, with 6.3 million votes, despite having been launched barely a year earlier. That vote, carefully engineered to favour a military-aligned government, resulted in the appointment of coup leader Prayuth Chan-ocha as prime minister. But Future Forward’s popularity clearly sat uneasily with Thailand’s conservative establishment.

The party was dissolved by the Constitutional Court in February this year, and its core leaders, including Thanathorn, were banned from politics for a decade. In response, the party has since rebranded: in parliament, as the Move Forward Party, and as an activist organisation called the Progressive Movement. 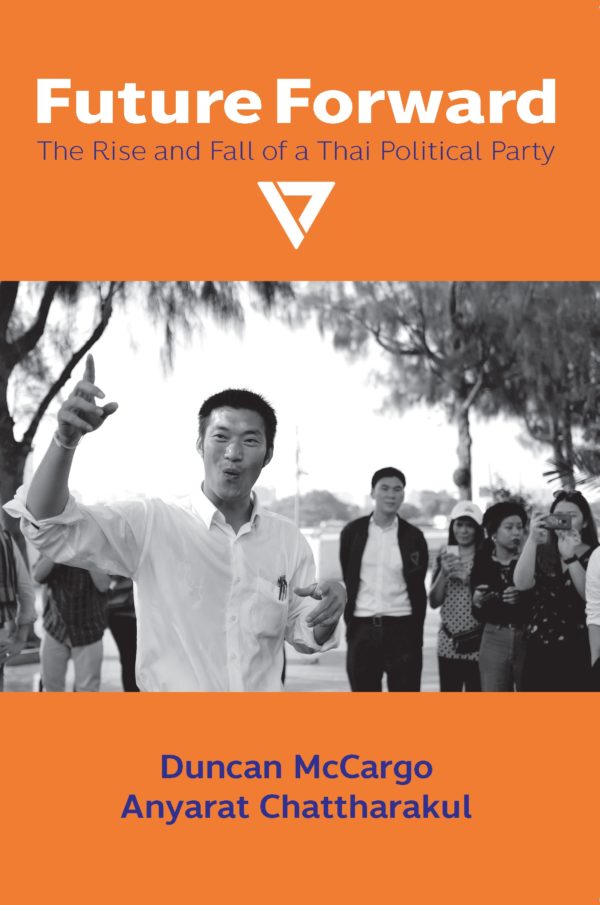 In Future Forward: The rise and fall of a Thai political party, Duncan McCargo and Anyarat Chattharakul explore how this new political entity surged to prominence. The authors profile Future Forward’s key leaders, trace its support, and examine the mix of policy and strategy that attracted a younger generation of voters steeped in the increasingly vigorous online sphere of Thai political activism.

Thanathorn is central to the party’s popularity. The authors view him as an example of the hyperleader, a term coined by Paolo Gerbaudo, describing a highly personalised and charismatic style of leadership, propelled by continuous media appearances and canny use of social media.

A prolific online presence, Thanathorn frequently appears on YouTube shows, Facebook Live events and a steady stream of party-produced images and videos, invariably wearing his signature white shirt with a row of pens tucked into his top pocket. He currently has 1.2 million followers on Twitter.

But party figures, and Thanathorn himself, are wary of fostering a cult of personality. The authors point to the cautionary example of another Thai hyperleader, Thaksin Shinawatra, who exercised his own brand of personalised politics and was ultimately removed in a coup in 2006 (accused, among other things, of undermining the monarchy).

In some respects, Thanathorn is difficult to pin down. On the one hand, he is the wealthy heir to an auto-parts conglomerate, a “billionaire” whose company once laid off more than 200 unionised workers involved in strike action. On the other, he is the political activist who espouses socialist ideals, rejects consumerism, and has been an active figure in various protest movements, including as part of pro-Thaksin red shirt protests in 2010, which were violently suppressed.

Future Forward also seemed to signal a break from Thailand’s fraught colour-coded politics that (broadly) pitted conservative yellow shirts, supported in Bangkok and parts of the south, against red shirts with a strong rural base in the populous north and northeast.

Alongside Thanathorn, two other prominent figures, profiled in the book, are seen as making up a dynamic and influential leadership trio.

Piyabutr Saengkanokkul, an activist legal scholar with a purported personal library of 2500 books, drove the party’s intellectual agenda. Pannika Wanich, a former journalist and TV presenter, was the party’s spokesperson, a gifted public speaker who garnered attention following her exclusion from parliament with a “no confidence” speech described as a “spectacular monologue of denunciation against the Prayuth government”.

The trio had significant public cut-through, and their opponents seemed to agree, with all three at various stages accused of being anti-monarchist (a serious charge, given Thailand’s lese-majesty law) and eventually banned from politics until 2030. McCargo and Anyarat note that the party faced at least 19 legal cases during its short existence.

What was behind Future Forward’s success? The party’s policies included rewriting the constitution, reforming the military (including reducing military expenditure and ending conscription) and decentralising political and budgetary power. However, party figures were doubtful that any one policy had attracted voters.

Instead, it was what Future Forward represented more broadly: a vote for change and strong opposition to military interventionism. As McCargo and Anyarat put it, the party had “captured the zeitgeist of a new generation” that was “utterly sick of being patronised”. Their message was amplified through social media channels that the party used more effectively than its opponents.

Future Forward also seemed to signal a break from Thailand’s fraught colour-coded politics that (broadly) pitted conservative yellow shirts, supported in Bangkok and parts of the south, against red shirts with a strong rural base in the populous north and northeast. For one supporter interviewed by the authors, Future Forward represented a “new politics with no colour”. Even its official colour, orange – a mix of red and yellow – seemed to signal a third way.

There is reason to temper expectations about Future Forward’s rise – not least as it is now officially banned. Although the party won votes around the country in 2019, it performed best in Bangkok, suggesting any parliamentary offspring would have work to do in winning constituencies in the north and northeast, where Thaksin-aligned parties were still overwhelmingly popular.

But the broader progressive movement, reflected in part in ongoing student-led protests, may have a lasting impact on the Thai political scene.

As McCargo and Anyarat note, by declaring Future Forward illegal, the government effectively quashed the political aspirations of a younger generation, leaving them with “no incentive to work within the system”. That younger generation is now responding on the streets.