Review: lessons for Australia and Britain from Iraq War

A new book demonstrates Britain’s decision to go to war in Iraq was one of politics with unintended consequences. 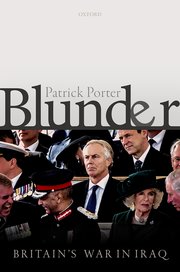 Clausewitz famously pointed out that war is a continuation of politics or policy by other means. Hannah Arendt wrote that “policy is the realm of unintended consequences”.

Patrick Porter, in Blunder, a wide-ranging study of Britain’s decision to go to war in Iraq and the unintended consequences, brings these two maxims together. He describes the relief in Whitehall (and Washington) that the long-running official British enquiry into the Iraq war happened to report just as the focus was on Brexit (which is now itself discernibly a classic case of unintended consequences).

The report of the Iraq enquiry, named for its chair, Sir John Chilcot, had been seven years in the making (2009-2016) and ran to 2.6 million words. It is generally agreed that both the establishment of the enquiry and its comprehensive report are marks of a mature democracy. It is an abiding work of relevance, including for Australian historians and political scientists. They, like Porter, will use its all-source documentation and compare it with the Australian official record which will begin to be released in 2021.

Chilcot’s colleagues were Privy Councillors expert in diverse fields. Australia does not have such a useful institution: we know the Privy Council mainly for its Judicial Committee, which was our final Court of Appeal until Gough Whitlam changed that as prime minister. Chilcot and his colleagues were not sitting in judgment, notably on British prime minister Tony Blair, who had appeared to be a conspicuous target because of his one-man decision-making. They instead sought to ascertain how the Westminster system of collective responsibility, with ministers looking to their officials for “frank and fearless” advice, had broken down.

Australian circumstances were both similar and different. The decision to go to war was also made by the prime minister, in the direct tradition of the Divine Right of Kings. It went unchallenged. Within that framework, decisions in the lead up to the war, from early 2002 to March 2003, were largely reached in the National Security Committee of Cabinet, in which John Howard encouraged free debate, involving officials. Blair’s engagement with US president George Bush was on a different level of intensity, involving weekly video-teleconferences, supplemented by numerous face-to-face conversations between members of Blair’s kitchen cabinet of advisers and the Bush administration.

Managing and manipulating an asymmetric alliance, a perennial challenge for Australia, posed fewer problems for Howard than for Blair. Chilcot’s critical verdict is that “influence should not be seen as an objective in itself”. For the minnow in the trio of core belligerents that was the end. Australia’s aim was to be on the inside, leaning America’s way. The exception was on recourse to the United Nations in September 2002. We still do not know whether Blair ever asked Howard for support, especially for progressing the Middle East Peace Roadmap.

Managing and manipulating an asymmetric alliance, a perennial challenge for Australia, posed fewer problems for Howard than for Blair.

Chilcot states that from the outset the US aim was the removal of Iraqi leader Saddam Hussein, while the UK sought to find a legal basis for what would otherwise be illegal regime change. Porter expresses a widely held view that Blair was as keen to get rid of Saddam Hussein as any American neo-con. Howard was widely disbelieved when he told journalist Michelle Grattan in March 2003 that he had never advocated regime change: subsequent evidence, in CIA Director George Tenet’s memoirs and investigative journalist Bob Woodward’s Plan of Attack, provides ammunition for the sceptics. Regime change was as much an integral aim of the invasion as was destroying the phantom weapons of mass destruction.

Howard’s unconvincing denial may have stemmed from his becoming aware of the implications of illegality for Australian political leaders and service personnel who, like their UK counterparts, can be arraigned before the International Criminal Court, whose jurisdiction the US vigorously rejects. The Australian High Commissioner in London would have reported the ferment of debate on legality.

When the Australian documents are released it will be possible to judge whether the appearance of lower priority for legality in Canberra, though acting legally is crucial for a middle power, is borne out. Legality is also crucial to harmonious relations between military and civilians. Howard took a risk when he did not engage the governor-general, the commander-in-chief, but fobbed him off.

AFP commissioner Mick Keelty, when he said that participation in the Iraq war would increase the danger of domestic terrorism, would have known he was supported by British assessments routinely exchanged.

Washington Embassy reporting in the weeks between 11 September and December 2001 will show how Howard made the commitment to go to war, in secret. National Archives releases in recent years have proved similar features in Robert Menzies policy of sending troops to Vietnam. Whitlam was exposing the truth in 1975 when malign fate intervened. Labor will surely be in power when archival releases bring the facts about Iraq into the open, as Chilcot and searching commentaries such as Porter’s are doing in Britain.