Passage of a historic law is unlikely to bolster Tsai Ing-wen in her struggle at the ballot box.

Rainbow flags during a mass wedding banquet for gay couples in front of the Presidential Palace in Taipei on 25 May (Photo: Sam Yeh via Getty)
Published 30 May 2019 10:00   0 Comments       Follow @Nick1Aspinwall

Taiwan recently made history by becoming the first country in Asia to legalise marriages between same-sex couples. On May 24, 526 couples throughout Taiwan registered the continent’s first same-sex unions. It’s a stunning victory for Taiwan’s LGBTQ community, which had fought a protracted political battle to secure their constitutional rights after the nation’s high court previously ruled in their favor.

There is growing concern, however, that the new law could become a flashpoint in Taiwan’s January 2020 presidential election, in which the opposition Kuomintang (KMT) is seeking to dethrone President Tsai Ing-wen and her ruling Democratic Progressive Party (DPP).

Tsai publicly backed the law, passed on 17 May, commemorating its passage by tweeting:

On May 17th, 2019 in #Taiwan, #LoveWon. We took a big step towards true equality, and made Taiwan a better country.

The LGBTQ community supported and welcomed the law, but it has not entirely forgiven Tsai for her failure to act after the high court first ruled in 2017 that banning unions between same-sex couples was unconstitutional. The court gave Taiwan’s legislature two years to remove laws restricting marriages to heterosexual couples, after which it would do so by court order. Taiwan’s legislature passed its law just one week before the court’s deadline.

Tsai had previously hesitated to push forward a compliant law amid a surge of conservative opposition, which included voices within her own party. In June last year, she told AFP that society was divided on the issue, but pledged to “bridge the differences” and propose a bill. Her Cabinet did so – eight months later, in February.

Tsai had previously hesitated to push forward a compliant law following the high court ruling on same-sex marriage amid a surge of conservative opposition.

In the meantime, groups opposing same-sex marriage backed three referendums aimed at restricting marriage to heterosexual couples. In November, Taiwan voted against allowing same-sex marriages recognition under the country’s Civil Code in a blow for marriage equality advocates. Legal experts have disagreed on whether Taiwan’s public referendums are binding, which is far from the only hole in the country’s newly revised referendum law. But in a deft political maneuver, Tsai’s cabinet designed its February bill to regulate same-sex marriages outside the Civil Code, in theory complying with both the high court ruling and the referendum result.

The socially conservative-leaning KMT – which, with some exceptions, broadly opposed the cabinet’s same-sex marriage bill – had called for Taiwan’s legislature to “respect the referendum” and vote down the act. The party’s eventual political candidate is likely to adopt similar language on the campaign trail. Foxconn founder and KMT candidate Terry Gou responded to the law by saying:

It is a pity that the resulting amendment did not comply with the substance of the referendum, but the Legislative Yuan has its functions and powers. Now that the law has been enacted, we are a country ruled by law, and I respect it.

Gou’s second sentence, however, is key. He and other KMT frontrunners, such as Kaohsiung mayor Han Kuo-yu, have been careful not to publicly oppose the law since its passage. Fears that the KMT will seek to overturn the law should it regain the presidency, while they may not be entirely unwarranted, remain premature.

In Taiwan’s 2018 referendums, 72.5% of voters agreed to restrict Civil Code marriages to heterosexual couples, while 61% agreed to protect the rights of same-sex couples outside the Civil Code. In what was a confusing and chaotic process, voters failed to deliver a clear mandate to either legalise or ban same-sex unions. Past opinion polls have shown that most Taiwanese support same-sex marriages, albeit at a slightly lower rate than their backing of same-sex unions. 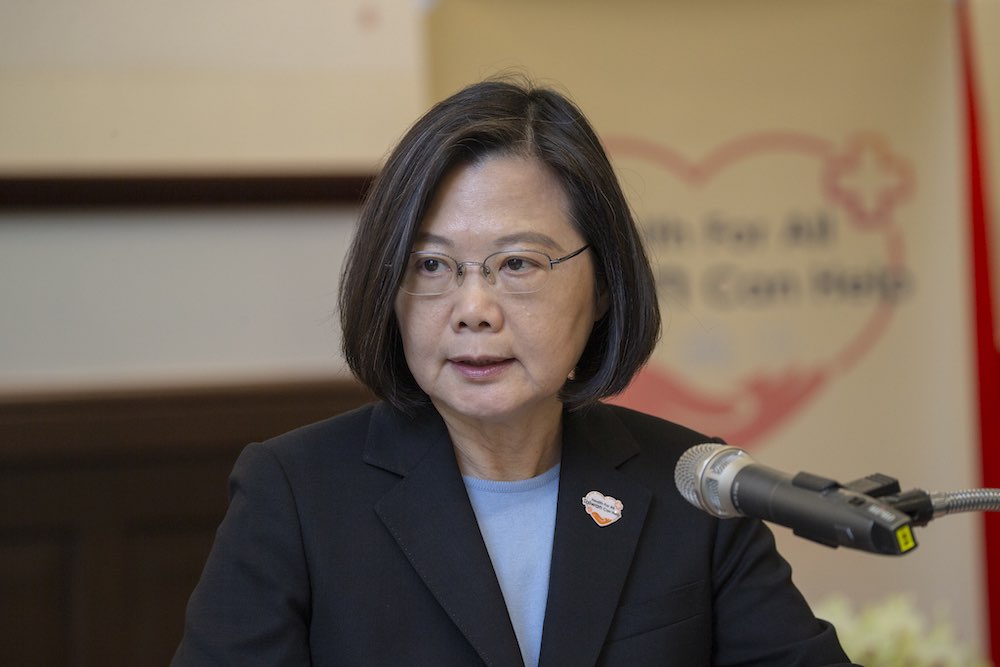 Tsai Ing-wen has her own obstacles to clear before she even becomes her party’s nominee (Photo: Taiwan Presidential Office/Flickr)

Following the high court ruling, however, Taiwan saw an influx of vocal opponents of marriage equality, backed monetarily by foreign hate groups and guilty of spreading disinformation prior to the November referendum.

It is thus hard to quantify to what extent gay marriage is a front-burner issue for the Taiwanese electorate. The KMT is polling well in projected matchups against Tsai, the incumbent, but it is unlikely to lean heavily on a stance that could alienate moderate voters – many of whom will, on principle, bristle at seeing the status of a recently passed law thrust into a partisan battle.

However, Tsai has her own obstacles to clear before she even becomes her party’s nominee.

Tsai has spent the past two months fending off an unexpected primary challenge from William Lai, her former premier and the popular ex-mayor of Tainan. Lai has accused Tsai of adopting an ineffective cross-strait strategy, arguing for a more direct confrontation with China. On other issues, including the same-sex marriage law, Lai has remained mostly silent.

Even as Lai has not taken his own stand on the law, his presence in the race has reinforced an image of Tsai as a passive leader. Some elements of the DPP and a handful of influential, deeply partisan Taiwanese media outlets have continued to embrace this perception.

And it may be hard for Taiwan’s LGBTQ community to shake that image of Tsai. To them, the law still falls short of full equality: it crucially restricts adoption rights and marriages involving foreign spouses from countries which do not recognise same-sex unions. Only the New Power Party (NPP), Taiwan’s largest third party, has loudly advocated for these rights – a constant reminder that LGBTQ activists, and the 2014 Sunflower Movement participants who formed the NPP, are not going to deem the law as Tsai’s banner accomplishment.