What Tom Cruise can teach us about great power competition

Hollywood’s “Healthy Development” of an audience in China carries a cost should reel life mask the real thing.

Last week Paramount Pictures released the trailer for its much-hyped Top Gun sequel, Top Gun: Maverick. The new movie sees Tom Cruise reprise his role as Pete “Maverick” Mitchell, now an aging fighter pilot facing the political and technological realities of a world in which there may no longer be room for him.

Against the backdrop of great power competition, Maverick is the perfect stand-in for the US-led rules-based international order.

The original Top Gun flew into cinemas more than three decades ago. It was a chest-thumping, testosterone-fuelled, jingoistic paean to American naval air superiority. As the highest-grossing movie of 1986, it was emblematic of its cultural moment: just one year before Mikhail Gorbachev had assumed the position of general secretary and leader of the Soviet Union, and United States grand strategy was focused on the containment of Soviet global adventurism.

China wields its economic influence to coerce private companies to endorse its territorial claims over Taiwan and, more broadly, promote its world view. Western consumers are left to swallow it.

Five months after Top Gun’s release, the Goldwater-Nichols Act entered into force. It mandated that the White House produce an annual report to Congress on the national security strategy (NSS) of the United States. The first ever NSS was released in 1987. “Moscow,” the document asserts, “seeks to alter the existing international system and establish Soviet global hegemony”. In response, the US sought to dominate the Soviet Union both militarily and economically. The aim was to force Moscow “to bear the brunt of its domestic economic shortcomings” and “discourage excessive Soviet military expenditures.”

In 2019, three decades after the collapse of the Soviet Union and the end of the Cold War, the world is once again beset by great power rivalry. The 2017 NSS identifies “the contest for power” as a “central continuity in history” and warns that “the revisionist powers of China and Russia” are “actively competing against the United States.”

Until recently, the prevailing wisdom among policymakers was that the international community should embrace China’s rise. Economic diplomacy, it was hoped, would stabilise US-China relations and force the two countries to work together. Increasingly, however, Beijing is wielding economic instruments to undermine the international system it’s been welcomed into.

Top Gun: Maverick is being co-produced by Tencent Pictures, a Chinese film distributor and production company. When the trailer for the sequel dropped last week, fans of the original film noticed a peculiar discrepancy: the patches on the iconic bomber jacket worn by Tom Cruise no longer bear the Taiwanese and Japanese flags.

Journalist Mark MacKinnon was among the first to spot the inconsistency.

There’s a new Top Gun movie coming out. And Maverick is wearing the same leather jacket - only this time it’s Communist Party of China-approved, so the Japanese and Taiwanese flag patches are gone (screenshot on right is from the new trailer)... pic.twitter.com/gUxFNFNUKX

In recent years Hollywood has increasingly tailored its movies for the Chinese market, with many of them being written and cast to appeal to Chinese audiences. According to the New York Times, of the top 100 highest-grossing films worldwide each year from 1997 and 2013, China helped finance 12 Hollywood movies. But in the five-year period that followed (2014–2018), China co-financed 41 of Hollywood’s top grossing films.

By 2020 the Chinese box office is forecast to gross $12.28 billion, compared to $11.93 billion in America. China has been selling more movie tickets than any other country since 2015 and Hollywood wants its slice of the market.

But Hollywood’s collaboration with China comes at a cost. In March 2018, Xi Jinping assigned responsibility for the regulation and censorship of film and television to the Central Propaganda Department. At last month’s Central Commission for Deepening Overall Reform, new “Guidelines on Deepening the Comprehensive Reform of the Film and TV Industry to Promote their Healthy Development” were reviewed and ratified. As a result, Hollywood co-productions are firmly in the sights of censors. 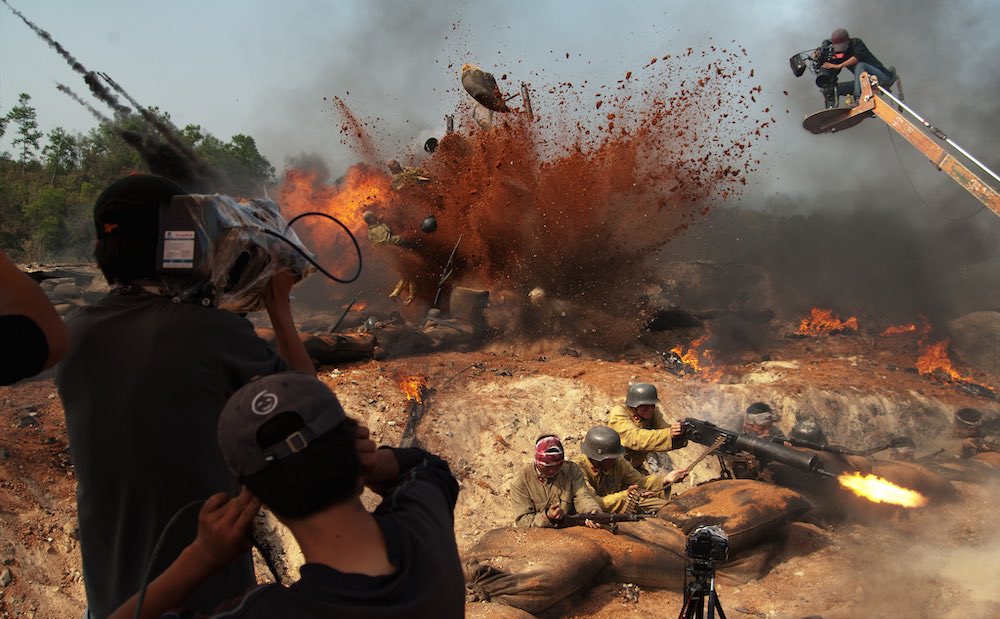 During the Cold War, the 1987 NSS warned that the Soviets had “established a massive political influence apparatus,” and that this propaganda machine incorporated “overt and clandestine activities in all types of media”.

In 2019, the players may have changed but the threats remain the same. And it extends well-beyond Hollywood.

The removal of the Japanese and Taiwanese patches from Tom Cruise’s jacket is reminiscent of Beijing’s economic coercion of Australian airlines. In 2018 Beijing effectively weaponised tourism by threatening to cut the inflow of mainland Chinese tourists to Australia. China is Australia’s number one market for visitors and the spending by tourists. China's state-run aviation regulator instructed Australian airline Qantas to remove references on its websites and other marketing material that suggested Taiwan, Hong Kong and Macau were part of countries independent from China.

Across industry sectors, China wields its economic influence to coerce private companies to endorse its territorial claims over Taiwan and, more broadly, promote its world view. Western consumers are left to swallow it.

At the launch event for the Top Gun: Maverick trailer at San Diego Comic-Con last week, Tom Cruise told a journalist, “to me, Top Gun is about competition”.

He’s right. And it’s time all US sectors – from Hollywood to Silicon Valley – rekindled their competitive mindset.